The Bay !    Sarasota’s newest Public Park Design, has been Approved ! 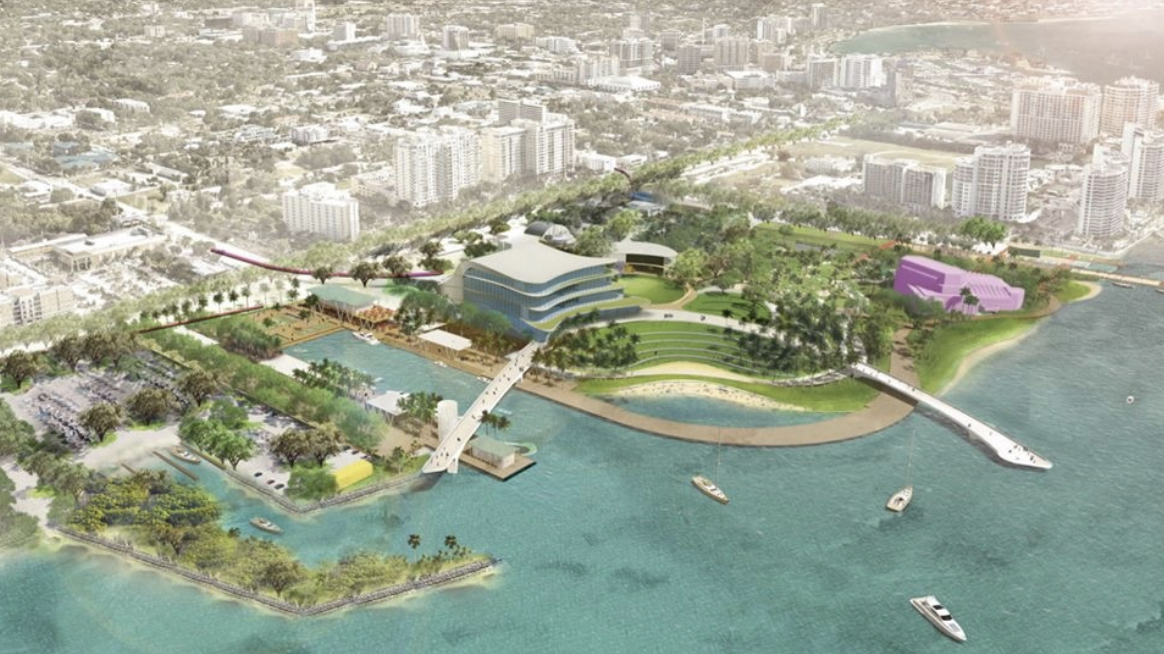 The Bay Sarasota has produced a finalized plan for redeveloping the land around the Van Wezel Performing Arts Hall.
by: David Conway Deputy Managing Editor – The Observer

The Bay Sarasota, the independent group that’s worked to create a community-driven vision for redeveloping more than 50 acres of city-owned bayfront land, has completed a finalized version of its proposed master plan for the property.

Representatives for Sasaki, the planning firm working with The Bay, outlined the proposal at a pair of meetings at the Van Wezel Performing Arts Hall today. The presentations discussed how the project was intended to enhance the cultural vitality of the site, provide expanded public open space, improve connectivity to other parts of the city and offer an economically and environmentally sustainable long-term strategy for managing the land.

Gina Ford, Sasaki’s lead planner on the project, detailed the core components of the master plan proposal. A new performing arts facility would house the Van Wezel’s programming, though the existing Van Wezel building would be preserved for some new use. A two-level parking garage would be built to reduce the footprint of surface parking on the site. A park would be built above the garage, located near a “destination” children’s play area.

This drawing showcases The Bay’s master plan concept for more than 50 acres of city-owned bayfront land.
A wishbone-shaped structure would extend over the northwest corner of the site — a distinct architectural feature the group has tentatively nicknamed “the arc.” The pedestrian structure would extend over the water at both ends, rising from a pier at the south terminus to a raised overlook at the north.

The plan emphasizes the site’s connection to the water. Near Tenth Street, there’s a waterfront “canal district” lined with restaurants, relocating the existing boat ramp to the north. A waterfront boardwalk cuts beneath the arc.

The canal district would include bay views and short-term spaces for boaters to dock and dine.
The south end of the site is defined by a “recreation pier,” which could include another waterfront restaurant. Mangroves line the edge of an inlet on the south side, and a kayak launch would provide opportunities for water recreation. New pedestrian bridges would allow visitors to travel from the south end of the site to the north along the bay.

The plan includes three pedestrian bridges above U.S. 41, linking the bayfront site to the east. Those bridges are located near 14th Street, Tenth Street and Boulevard of the Arts. Ford said these bridges are not only supposed to get people to the site, but also to stand out as distinct architectural works on their own.

The cultural district would include enhanced landscaping and a promenade to connect the existing structures and new arts-focused buildings.
Another group that doesn’t have a defined home in the latest master plan? The Sarasota Orchestra, whose future on the bayfront appears to be in question. In a previous interview, Sarasota Orchestra President and CEO Joseph McKenna said the organization is still in the process of evaluating its future needs.

Today, Waddill said the orchestra is debating whether to stay on the bayfront or search for a new location elsewhere in the city. For now, the master plan identifies a “potential future cultural venue” where Holley Hall is currently located.

The plan could cost between $100 million and $150 million to implement, and that’s before including the expenses associated with a new performing arts venue. Once it’s built, estimates peg the annual maintenance costs at $4 million to $6 million per year.

The Bay representatives said the plan is to build out the site over the course of decades. They’ve already identified a potential first phase, though: the recreation pier at the south end of the site. That portion of the project could cost $10 million to build and $1 million to $2 million to maintain annually. If the city adopts the master plan, Ford said the group hopes it could develop a segment of that recreation pier — a “Phase 1A” — in about a year.

The recreation pier would include flexible space for events and activity.
The Bay also outlined a proposed structure for managing the site in the future. The group called for the creation of a nonprofit conservancy to operate the site, relying on a mix of public and private resources to offer enhanced maintenance and specialized oversight on the bayfront. The city would help develop the terms of an agreement with the conservancy, The Bay said.

The full presentation is available on The Bay’s website.

At the 11 a.m. meeting at the Van Wezel, representatives for The Bay fielded questions about the plan — and the logistics of getting it built. Ford said the feedback she heard today was largely positive, and she was optimistic the group had developed a plan that could become a reality.

“I think we did it,” Ford said. “People are really happy.”

She acknowledged some questions remain unanswered. Later today, The Bay is scheduled to meet with the City Commission alongside the Van Wezel Foundation and the Sarasota Orchestra to discuss the future of the arts venues on the site. The Bay has also set up a working group for boaters as it attempts to address outstanding concerns from those who use the Tenth Street Boat Ramp.

The Bay has two more public presentations scheduled for Tuesday at the Municipal Auditorium. Even though the master plan is nearing a final state, The Bay intends to continue to gather community feedback and potentially adjust the proposal ahead of a scheduled Sept. 6 presentation to the City Commission.

The group hopes the city will formally adopt the master plan at that meeting. Ford stressed that, even if the proposal was adopted, there would be opportunities to change the master plan as more information becomes available. For now, the goal is to get the community and city leaders to commit to an ambitious vision for the bayfront site.

“It’s a framework, and it’ll continue to evolve as we get feedback,” Ford said. “There’s only so much we can know at any one time. You don’t stop learning, and you don’t stop adjusting the master plan when it’s adopted.”

I’m so happy to see it moving forward, wended something in that parking lot wasteland and now we have it. It will be a Major addition for a lovely city that was severely lacking in another choice for downtown waterfront leisure. Now all we need is a safe walking trail to connect the two, so that Sarasota’s bayfront is a Public Jewel for all to enjoy !